Antiplatelet management of patients with acute coronary syndromes (ACS) has evolved substantially in recent years following publication of major randomized clinical trials that have shown a significant reduction in major cardiovascular events with the introduction of new antiplatelet agents. This was followed by revision of guideline recommendations for antiplatelet therapy in ACS patients. However, up until recently little was known about the implementation of these new recommendations in a contemporary real world setting of patients hospitalized in cardiology wards in Israel.

The TRITON-TIMI 38 and PLATO trials (1,2), published in 2007 and 2009, respectively, have shown that management strategies that employ the new, more potent, antiplatelet agents, prasugrel (Effient) and ticagrelor (Brillinta) are associated with a significant reduction in the risk of recurrent cardiovascular events compared with clopidogrel (Plavix), which constituted the conventional management strategy in this population until recently.

Prasurgel, a thienopyridine (like ticlopidine or clopidogrel), is a prodrug whose active metabolite is an irreversible inhibitor of the platelet P2Y12 receptor, and thereby of platelet aggregation. Although the biologic efficacies of the active metabolites of clopidogrel and prasugrel studied in vitro exert equal antiplatelet effects, the generation of the prasugrel metabolite is approximately 10 times as great as with clopidogrel administration, resulting in greater potency.

The TRITON–TIMI 38 trial randomized 13,608 patients with ACS (26% with ST-elevation myocardial infarction [STEMI]) in whom PCI was planned (1). The loading dose of prasugrel was 60 mg, followed by a 10-mg daily maintenance dose. The loading dose of clopidogrel was 300 mg, followed by a maintenance dose of 75 mg daily with a follow-up of 15 months. The primary efficacy endpoint (cardiovascular death, MI, and stroke) was reduced significantly by 19%. In addition, the incidence of stent thromboses in the prasugrel group was reduced in half compared with clopidogrel. However, the effect of prasugrel on mortality in the trial was neutral (1). Not surprisingly, the greater platelet inhibitory effect of prasugrel was associated with more common serious bleeding. In TRITON–TIMI 38, there was a 32% higher relative incidence of serious, including fatal, bleeding. The risk of bleeding was especially higher in the elderly (≥75 years), in whom the use of prasugrel should be limited to those at high risk, and in those with reduced body weight (<60 kg). Prasugrel is contraindicated in patients with a history of stroke or a transient ischemic attack (1). Prasugrel should be discontinued at least a week before surgery whenever possible due to an irreversible effect on platelet activity.

In contrast to the thienopyridines (ticlopidine, clopidogrel, and prasugrel), whose active metabolites are irreversible platelet inhibitors, ticagrelor is a reversible blocker of the P2Y12 platelet receptor that acts directly on the platelet. Although it has an active metabolite, its potency is similar to that of the parent drug. Thus, ticagrelor can inhibit P2Y12-mediated platelet aggregation almost completely. The phase III pivotal trial (PLATO) compared the combination of ticagrelor (90 mg twice daily) and clopidogrel (300 or 600 mg loading dose and 75 mg daily maintenance dose); both groups also received ASA. PLATO enrolled 18,624 patients, of whom approximately 40% had STEMI (2). The primary endpoint, a composite of cardiovascular death, MI, and stroke, was reduced significantly by 16%. There were also significant 16% reductions in MI, 21% in cardiovascular death, and importantly a 22% relative reduction in total mortality. The greater clinical efficacy of ticagrelor was observed across a broad array of subgroups, including patients who had previously received clopidogrel, patients treated with a noninvasive strategy, and patients with STEMI. Furthermore, ticagrelor is not contraindicated in patients >75 years of age, reduced body weight, and those with a history of stroke or a transient ischemic attack.

The PLATO investigators calculated that if 1000 hospitalized patients with ACS treated with ticagrelor and ASA were compared with a similar group treated with clopidogrel and ASA, there would be 14 fewer deaths, 11 fewer MIs, and 6 to 8 fewer cases of stent thrombosis. Ticagrelor could be started at the time of presentation to the emergency department and continued for medically managed patients or those undergoing PCI; but if necessary, it could be stopped and CABG could be carried out 48 to 72 hours later.

Following publication of the pivotal TRITON-TIMI 38 and PLATO trials, guidelines recommendations for antiplatelet therapy in ACS patients have evolved substantially.

The updated European Heart Society guidelines (followed by the Israeli Heart Society) for the management of STEMI were published in 2012 (3), and provide the following Class I options for treatment with P2Y12 inhibitors in addition to aspirin:

- Prasugrel in clopidogrel-naive patients, if no history of prior stroke/TIA, age <75 years.
- Ticagrelor (no limitations provided)
- Clopidogrel, preferably when prasugrel or ticagrelor are either not available or contraindicated.

Similarly, the updated European Heart Society guidelines for the management of ACS patients without persistent ST-segment elevation (published in 2011) (4) provide the following Class I recommendations for treatment with P2Y12 inhibitors:

- A P2Y12 inhibitor should be added to aspirin as soon as possible and maintained over 12 months, unless there are contraindications such as excessive risk of bleeding.

- Prolonged or permanent withdrawal of P2Y12 inhibitors within 12 months after the index event is discouraged unless clinically indicated.

- Ticagrelor (180-mg loading dose, 90 mg twice daily) is recommended for moderate-to-high risk patients for ischemic events (i.e. with elevated troponins), regardless of initial treatment strategy and including those pre-treated with clopidogrel (which should be discontinued when ticagrelor is commenced).

- Prasugrel (60-mg loading dose, 10-mg daily dose) is recommended for P2Y12-inhibitor-naïve patients (especially diabetics) in whom coronary anatomy is known and who are proceeding to PCI unless there is a high risk of life-threatening bleeding or other contraindications.

Based on the above updated guideline recommendations it appears that the vast majority of ACS patients (both with and without persistent ST-segment elevation) should be treated with the new, more potent, P2Y12 inhibitors (especially since currently clopidogrel is recommended only in small minority of patients who cannot receive ticagrelor or prasugrel). However, the Acute Coronary Syndrome Israel Survey (ACSIS) 2013 suggest that there is a gradual transition in the implementation of data from clinical trials to a real world setting.

ACSIS is a biannual nationwide survey conducted for a period of 2 months in all 26 coronary cardiac units and cardiology wards operating in Israel. The survey is conducted under the supervision of the Israeli Heart Society and the Israeli Working Group on Acute Coronary Care, is coordinated by the Israeli Association for Cardiovascular Trials. Data from the ACSIS surveys have been utilized by the Israeli Heart Society and the Ministry of health over more than a decade for the assessment of management strategies and the application of therapeutic policies in Israel.

The recent ACSIS survey was conducted on March and April 2013, comprising approximately 2000 patients, and was focused on extensive data collection regarding the utilization of antiplatelet drugs. This provides a unique opportunity to learn about the implementation of current recommendations in a real world setting.

Data from ACSIS 2013 were recently presented in a conference attended by cardiologists from all medical centers in the country, and have shown the following main findings regarding the utilization of antiplatelet drugs in Israel:

- A P2Y12 inhibitor (clopidogrel, prasugrel, or ticagrelor) is being administered at relatively high rate of 86% to ACS patients in Israel. However, only approximately half of this population is being treated with the more potent and efficacious antiplatelet drugs, namely ticagrelor or prasugrel.

- Three-quarters of the patients admitted with STEMI to CCUs in Israel are being treated with the more potent and efficacious antiplatelet drugs, whereas the rest are still mostly treated with clopidogrel.

- Lack of consistent management is even more evident among patient admitted with the diagnosis of NSTEMI, in whom clopidgrel is administered in approximately one-half.

- Despite the fact that ESC guidelines recommend initiation of ticagrelor in ACS patients who were pretreated with clopidgrel, this recommended early antiplatelet switch is implemented in only a minority of cases.

- There is a wide heterogeneity in the management of ACS patients among medical centers in the country, wherein approximately one third of medical centers still utilize clopidogrel in most patients, while the rest employ a more balanced management strategy.

It is important to note that the ACSIS depicts picture of patients admitted with ACS in a real world setting rather than those selected to participate in a randomized clinical trial based on inclusion/exclusion criteria. Thus, the lack of consistent administration of the newer antiplatelet agents may represent a more cautious policy of cardiologists in Israel, who are more reluctant to prescribe more potent drugs (associated with a increased bleeding risk) to higher risk patients with multisystem disorders who were not enrolled in clinical trials.

Despite these complexities, however, the majority of ACS patients who are currently being treated with clopidogrel have no contraindication to treatment with a more potent antiplatetet agent.

It should also be noted that most contemporary STEMI patients can receive a more potent antiplatet agent, since age, prior ischemic stroke, or weight, do not represent a contraindication to ticargelor in this population.

The ACSIS survey has shown that over the past decade there has been a steady decline in 1-year mortality following ACS in Israel, with stabilization in mortality rates in ACSIS 2013. Thus, appropriate usage of DAP therapy in this population may lead to a further improvement in survival rates following ACS over the next decade. 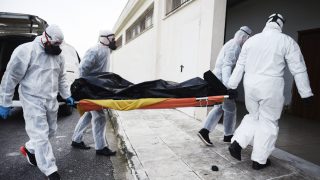